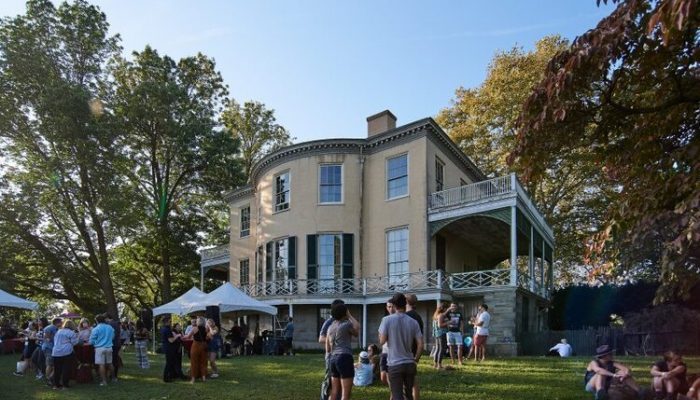 Article from the City of Philadelphia.

Planning for the renovations started in 2011. That’s when Philadelphia Parks & Recreation selected an architect, MBTA Associates. The firm identified issues throughout the house. Design work started in 2017 and finished in 2019. The pandemic delayed the start of the construction until March 2021.

Lemon Hill sits high on a bluff above Boathouse Row. It has a sweeping view of the city skyline and is easily spotted from the river drives and I-76. Henry Pratt, a wealthy merchant, built the mansion in 1800. He surrounded his home with a large, elegant greenhouse and pleasure gardens. Pratt named his showplace after the median lemon, a variety of citrus grown in the greenhouse.

Pratt used the house as a summer house and showroom. He hosted lavish parties. The home is one of the nation’s finest examples of Federal-style architecture. Its most unique feature are three oval rooms, one on each floor stacked above the other. These rooms were different than anything most guests at the time had seen.

The home’s gardens also captured people’s attention. Pratt opened them to the public by “ticket of admission.” Many garden magazines wrote about the gardens. This attracted visitors from all over the world.

After Pratt’s death in 1838, the gardens fell into disarray. But Philadelphians rallied to save them from development. In 1855, after much debate, the City acquired the land as a public park. This was the first purchase of its kind in Philadelphia’s history. The purchase was the first of many that helped create the city’s largest park.

Since then, Lemon Hill has served as a beer garden, restaurant, candy shop, and ice cream parlor. A major restoration of Lemon Hill was undertaken in 1926. Fiske and Marie Kimball undertook this work and lived in the mansion from 1926 to 1955. Fiske Kimball has an easy commute to work—he served as Director of the Philadelphia Museum of Art. From 1957 to 2017 the Colonial Dames of America, Chapter II, operated the mansion as a house museum.

Goals for the renovation

The rehabilitation team’s goal is to:

Lemon Hill is listed on the city and National Historic Registers as a historically significant property. This requires that any renovations follow specific rules to protect the building. The following goals guide the decisions made in this repair project.

When the renovations are complete the house will continue to serve the public for decades to come. The work underway includes:

The bulk of the changes during the first phase of this project will take place inside the mansion. Later phases will involve exterior work. This will include:

Parks & Rec recognizes the following who are helping with this important project: